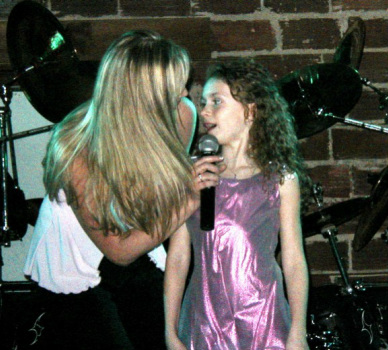 iCandy is a seasoned performer in the 3D virtual worlds as well as the real world we call 1st Life. Bright, strong, and airy are some terms people lend to her vocal character. Her Maestro says a souful voice.
​
iCandy began her craft at a very early age, performing in competitions around the southeastern United States. After getting more focused by taking instruction from Maestro David Kyle in Seattle, whose favorite students include Ann Wilson with Heart, Geoff Tate with Queensryche, Layne Stayley, and a few Tony Award winners as well!

She then began her professional career by becoming a featured singer with John Holte's Radio Rhythm Orchestra. She went on to work with the amazing Sonny Byers and is R&B and Motown Revue. iCandy finally found her niche after auditioning as a lead singer, later becoming the front girl for the popular coverband iCANDi. She toured around the Pacific NW, working club's, casino's, and private functions. iCandy currently works with the Vocal Maestro, Nelson Del Pino. whose students include top ten American Idol contestants!

iCandy is now known around the world in many virtual world sims as a powerhouse vocalist who can do just about anything she wants in mainstream music.  iCandy brings professional workmanship to her craft. She has a very extensive song list- doing many genres like jazz, pop, rock (classic and Alternative), adult contemporary, show tunes, blues, R&B and some originals. She is very comfortable and personable with her audience and takes care of the business side of her talent with grace and dignity-always an approachable artist.

iCandy works in SL and RL as a philanthropist and motivational speaker. Her focus is on empowering those who have suffered from Childhood Trauma, Adult Trauma, and those with mind-related illnesses and focusing on the recovery, validation, and support to these beautiful people through artistic expression. iCandy is proud to be a part of www.iDONTdoSILENT.com
BOOK iCANDY OVERLAND ONLINE! FAST AND EASY